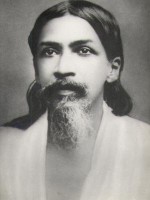 I am the bird of God in His blue;

I sing the notes of the sweet and the true

For the god’s and the seraph’s ear.

I rise like a fire from the mortal's earth

Into a griefless sky

And drop in the suffering soil of his birth

My pinions soar beyond Time and Space

I bring the bliss of the Eternal’s face

And the boon of the Spirit’s sight.

I measure the worlds with my ruby eyes;

I have perched on Wisdom’s tree

Thronged with the blossoms of Paradise

By the streams of Eternity.

Nothing is hid from my burning heart;

My mind is shoreless and still;

My song is rapture’s mystic art,

My flight immortal will.

With wind and the weather beating round me

Up to the hill and the moorland I go.

Who will come with me? Who will climb with me?

Not in the petty circle of cities

Cramped by your doors and your walls I dwell;

Over me God is blue in the welkin,

Against me the wind and the storm rebel.

I sport with solitude here in my regions,

Of misadventure have made me a friend.

Here to the wind-swept uplands ascend.

I am the lord of tempest and mountains,

I am the Spirit of freedom and pride.

Stark must he be and a kinsman to danger

Who shares my kingdom and walks at my side.

In the blue of the sky, in the green of the forest,

Whose is the hand that has painted the glow?

When the winds were asleep in the womb of the ether,

Who was it roused them and bade them to blow?

He is lost in the heart, in the cavern of Nature,

He is found in the brain where He builds up the thought:

In the pattern and bloom of the flowers He is woven,

In the luminous net of the stars He is caught.

In the strength of a man, in the beauty of woman,

In the laugh of a boy, in the blush of a girl;

The hand that sent Jupiter spinning through heaven,

Spends all its cunning to fashion a curl.

These are His works and His veils and His shadows;

But where is He then? by what name is He known?

Is He Brahma or Vishnu? a man or a woman?

Bodied or bodiless? twin or alone?

We have love for a boy who is dark and resplendent,

A woman is lord of us, naked and fierce.

We have seen Him a-muse on the snow of the mountains,

We have watched Him at work in the heart of the spheres.

We will tell the whole world of His ways and His cunning:

He has rapture of torture and passion and pain;

He delights in our sorrow and drives us to weeping,

Then lures with His joy and His beauty again.

All music is only the sound of His laughter,

All beauty the smile of His passionate bliss;

Our lives are His heart-beats, our rapture the bridal

Of Radha and Krishna, our love is their kiss.

He is strength that is loud in the blare of the trumpets,

And He rides in the car and He strikes in the spears;

He slays without stint and is full of compassion;

He wars for the world and its ultimate years.﻿﻿

My soul arose at dawn and, listening, heard

One voice abroad, a solitary bird,

A song not master of its note, a cry

That persevered into eternity.

My soul leaned out into the dawn to hear

In the world's solitude its winged compeer

And, hearkening what the Angel had to say,

Saw lustre in midnight and a secret day

Was opened to it. It beheld the stars

Born from a thought and knew how being prepares.

Then I remembered how I woke from sleep

And made the skies, built earth, formed Ocean deep.﻿﻿

A Vision of Science

I dreamed that in myself the world I saw,

Was one, clear vision and denial cold,

Yet in her limits strong, presumptuous, bold;

The second with enthusiasm bright,

Flame in her heart but round her brows the night,

Faded as this advanced. She could not bear

That searching gaze, nor the strong chilling air

These thoughts created, nourishing our parts

Of mind, but petrifying human hearts.

Science was one, the other gave her name,

Religion. But a third behind them came,

Veiled, vague, remote, and had as yet no right

Upon the world, but lived in her own light.

Wide were the victories of the Angel proud

Who conquered now and in her praise were loud

The nations. Few even yet to the other clove, —

But this was confident and throned. Her heralds ranged

Claiming that night was dead and all things changed;

For all things opened, all seemed clear, seemed bright —

Save the vast ranges that they left in night.

However, the light they shed upon the earth

Was great indeed, a firm and mighty birth.

A century's progress lived before my eyes.

Delivered from amazement and surprise,

Man's spirit measuring his worlds around

The laws of sight divined and laws of sound.

Light was not hidden from its searching gaze,

Nor matter could deny her myriad maze

To the cold enquiry; for the far came near,

Dissolving and combining, till she trod

Firmly among the stars, could weigh their forms,

Foretold the earthquakes, analysed the storms.

Doubt seemed to end and wonder's reign was closed.

The stony pages of the earth disclosed

Their unremembered secrets. Horses of steam

Were bitted and the lightnings made a team

To draw our chariots. Heaven was scaled at last

Its strong obstructions to the mastering mind.

So moved that spirit trampling; then it laid

Its hand at last upon itself, how this was made

Mind by its forms, the wearer by the dress.

Then the other arose and met that spirit robust,

Who laboured; she now grew a shade who must

Fade wholly away, yet to her fellow cried,

“I pass, for thou hast laboured well and wide.

Thou thinkest term and end for thee are not;

But though thy pride is great, thou hast forgot

The Sphinx that waits for man beside the way.

All questions thou mayst answer, but one day

Her question shall await thee. That reply,

As all we must; for they, who cannot, die.

She slays them and their mangled bodies lie

Upon the highways of eternity.

Therefore, if thou wouldst live, know first this thing,

Who thou art in this dungeon labouring.”

And Science confidently, “Nothing am I but earth,

Tissue and nerve and from the seed a birth,

A mould, a plasm, a gas, a little that is much.

In these grey cells that quiver to each touch

The secret lies of man; they are the thing called I.

Shakespeare was this; this force in Jesus yearned

And conquered by the cross; this only learned

The secret of the suns that blaze afar;

This was Napoleon's giant mind of war.”

I heard and marvelled in myself to see

Yet the weird paradox seemed justified;

But the third Angel came and touched my eyes;

I saw the mornings of the future rise,

I heard the voices of an age unborn

That comes behind us and our pallid morn,

And from the heart of an approaching light

Who shalt do mightier miracles than these,

Then from our hills the ancient answer pealed,

“For Thou, O Splendour, art myself concealed,

And the grey cell contains me not, the star

I outmeasure and am older than the elements are.

Whether on earth or far beyond the sun,

I, stumbling, clouded, am the Eternal One.”﻿﻿